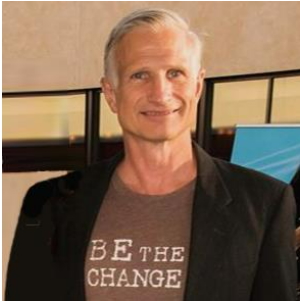 Gary is a pioneer in the Lifestyles of Health and Sustainability (LOHAS) market, bringing together 30 years of experience in marketing, business development, sales, technology and management. At Ethical Markets Media he led the launch of the first national weekly television series reporting on issues of redefining success in terms of sustainability and social consciousness.

Gary has a vast network of strategic relationships which he has developed since he founded Awareness Marketing, a consulting firm specializing in integrated health, personal growth and natural products in 1995.  Gary has helped launch several companies in this industry, serving in executive roles including CEO, COO and VP. Business plans he has written have helped raise over $11 million in funding, and the acquisition of several companies.

Gary has served as Director of CSRwire, a corporate social responsibility newswire service. He was a cofounder of BroadcastHealth.com; a leader in producing video for web streaming and broadcast and was responsible for their production, content and business development. He served as COO of Passionate Living Media a television, print, radio and internet media company.  He has also worked with companies such as Healthy.com, Deepak Chopra’s MyPotential.com, Akesis Naturals, ConvergenceHealth, Bamboo EcoResort, Whole Life Expos and Media, and Peter Pan Entertainment (now Inspired Media).  He has organized, produced, and promoted major events such as the Healthy Living Expo, and worked with many notable leaders.

Gary brings to LOHAS the skills he earned in the computer industry, where he won industry recognition, including two PC magazine's Editors Choice Awards. His efforts contributed to the growth of Syncro Corporation to #173 on the Inc. 500. Gary helped launch MicroWarehouse's fastest growing, highest revenue catalog. Working with several startups has given Gary a full-range of skills in starting, developing and running a company.

Gary graduated from Villanova University with a degree in Electrical Engineering, where he was a member of the 1978 NCAA Champion Indoor Track team, and the Villanova Singers. He is an Eagle Scout and member of the Savoy Company, the world's oldest Gilbert and Sullivan company, singing Bass. He is active in many organizations and has been on the Board of Directors for Nourish America, GreenHouse Network, Center for Advancement in Cancer Education, Peaceful Passages and is an advisor  We The World, and others.  He is working on his first book, From Activist to Catalyst.